Revenge of the Mummy -- SPOILERS

This text includes spoilers! This is intended for families who are unsure if the ride will be too intense for their children or wish to know -- all of the freakouts and thrill ride elements -- BEFORE riding the first time. It's also a great refresher for someone who has already been on the ride and may have missed a key element of the story behind this amazing new attraction at Universal Studios Florida and eventually Universal Studios Hollywood. So, read at your own risk. If you have never experienced the ride you will kick yourself for continuing to read at this point as that first ride and all of its sensory wonder and glory will be snapped like a hapless twig. Curiousity not only killed the cat but it banged up the joys of your rookie ride! Go back to the more general ride description! Still here? Well, read on. . . 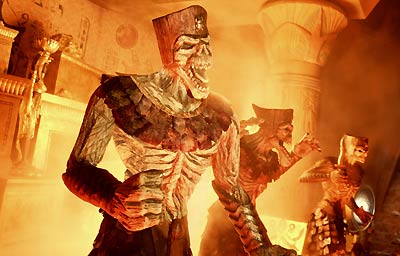 The Museum of Modern Antiquities looks like a bargain-priced façade and that's by design. You are walking into a movie set, hired as an extra for a mine car chase scene in the latest release of the popular Mummy movie series -- Revenge of the Mummy. The first few rooms in the queue area -- and, yes, there are several rooms that you will go through before boarding -- are bare backstage areas with switchback queue areas to walk through. Perched above are television monitors which help set up the attraction's storyline.

Unless the lines are brutally long you'll probably miss many of the key elements. You won't know that some crew members on the set -- including Reggie with his red baseball cap -- think that the movie set is cursed with the evil Imhotep from the Mummy films coming back to claim some more human souls for his collection. Your key to salvation if you should ever come across Imhotep pimping for your soul? A Med-jai symbol. You won't realize that Brendan Fraser isn't getting any kind of respect from the catering company. All he wants is a cup of Joe but his wishes are squashed by a staff that will bend over backwards to make sure a crew member has fresh-baked cookies but won't give Brendan his java fix.

Then the queue takes a turn for the creepy. The cheesy monitors are gone and you are in a dim lit burial room. You navigate around a mummy's tomb in the center. Lay your hand on an imprint and the lights will flicker and the soundtrack is tweaked. You see a black and white monitor where folks are crossing a bridge. It doesn't look familiar to you. Not yet, anyway. Underneath the monitor is an illuminated button. Press it and the folks in the monitor are likely to be startled. What's the connection? Answers are coming. The line moves on.

A short passageway follows. Off to the side you see a relic inside a hole in the wall. If the tomb beckoned your touch will this be as inviting? No such luck. This is a hologram. Sticking your arm into the hole will only invite a blast of air as a clever freakout.

Then you find yourself on a familiar looking bridge. Yes! It's the one from the monitor in the tomb room. It seems harmless enough until you start to wonder what made those ahead of you in line jump when it was their turn to cross. If someone should press that same button you will be discover a blast of air shoot up from under the bridge.

This room features a large prop -- an ancient statue being hoisted by ropes. It ain't easy being an extra! The room's queue ends in a stairwell. A short climb later you find yourself at the boarding station.

At this point you will be placed into one of two loading stations. Each "mine car" features four rows of four seats apiece. Assuming you are tall enough to meet the 48-inch height requirement you are good to go at this point. You may not be able to request a row preference but every seat is a good one. The front row offers the better view and you will come off the ride misty-eyed -- by design. The back rows offer more exhilarating airtime during the wild coaster sequences.

You are held in by a simple lapbar. If you have any carry-ons -- and this includes fanny packs -- you will have already checked them into the free timed lockers before you entered the line. Once all 16 passengers are snugly secured you will move up to find that the dual loading stations merge into one.

When it's your turn you will roll slowly to see a shadow crossing a stone stairwell. You turn and you see an altar. Off to the side is a mummy sporting a red baseball cap. Yikes! Reggie!

"Are you insane," he asks, shivering in his bandaged form. "Get out of here! The curse is real. This whole place is a trap. He's after your souls. Look for the Med-jai symbol. It's your only hope."

At that point Imhotep's might voice interrupts your quivering mummified movie buddy.

"Silence! With your souls I will rule for all eternity."

You roll into the next room, in which Imhotep shows off his softer side.

"Serve me and savor riches beyond measure."

At this point, yellowy spotlights turn on to your left and right, illuminating gold coins, jewels and other seemingly valuable artifacts. Where's the catch? There has to be a catch?

"Or refuse me and suffer a more bitter treasure."

Eight mummified skeletal warriors -- four on each side of the track -- shoot up in front of the promised riches. They are lifeless but quite imposing. Your way out starts closing but you duck out just in time.

Phew! That was close. The only thing is that now you're at a dead-end. It's a brick wall with a small rectangular opening. Screeching balls begin to tumble on down. Then the projection on the walls start filling up with small blotches. It's those pesky scarab beetles. They want you. Badly. Your mine car starts rolling backwards just as small drops of water rain down on you.

You take a small backwards dip and come to a jerky stop. You have come to a halt but not the track. It's on a turntable and starts making a very cool 180 degree turn. A projected image exhales smoke, which becomes the image of Imhotep.

"Not even the Med-Jai can save you now," he warns. "There is no escape. Your end shall be my beginning."

You start going up an uphill incline and then pick up some serious speed as you are launched towards a projection of Imhotep's mouth.

"Your souls are mine!"

A brief coaster sequence follows. You see neon symbols depicting battle. The coaster is fast but there are no loops and the dips are minor. It is mostly banked turns but the mine train is really hauling at this point.

You pull into an unloading station. Apparently, you've made it.

A monitor features a silhouette of a female ride crew member.

"We hoped you enjoyed your ride," she says. "Please gather all personal belongings"

At this point she begins to disintegrate and the monitor shatters. Water is sent your way, simulating the glass shards of the busted screen.

"Prepare to forfeit your souls," Imhotep yells. He laughs as fire engulfs the ceiling. Yes, it's real. You can feel the heat. "Death is only the beginning."

This leads to the second segment of the coaster portion. It starts off with a cool banked drop into Imhotep's breath -- orange-tinted smoke. You'll notice some flashing lights to your right as you come on down -- that's your picture being taken and made available for purchase -- assuming that you either survive or that Imhotep is brilliant enough to set up a gift shop with onboard photos at his soul redemption altar.

This leg of the ride is shorter than the first one. You eventually see Imhotep's symbol to your left, orange fog ready to claim you -- when you see the Med-Jai symbol straight ahead. You're saved. Imhotep is toast. Reggie? Sorry, bud, he's toast.

A monitor with Brendan Fraser laying back in a director's chain welcomes you as you head towards the dual unloading stations.

"Hey, welcome back," he says with a wide grin. "I would have enjoyed this interview a lot more if I had gotten my cup of coffee!"

At that point a mummified skeletal warrior hands him a tasty double latte. Brendan screams, falling back and you hear a crashing sound as the monitor fades to black.

You made it! The lapbars release and you head on out.

The cozy baby swap area -- complete with a diaper changing station and a television showing mummy cartoons -- is between the two unloading stations. There is a separate queue that leads straight to the baby swap area, where one set of riders can ride and then the person taking care of the child can switch off and be boarded without waiting.

You also have a single riders line. It bypasses the queue areas and leads right up to the stairwell finale. Yes, your wait will be shorter -- perhaps significantly shorter -- by going this way but you will not be able to enjoy the interactive queue and, more importantly, you must be willing to ride alone because odds are that you will be separated from the rest of your party.

Don't worry, everyone meets up at the end, down the ramp at the proverbial gift shop and picture purchasing area!

Death is only the beginning -- yet you lived to make it to the end!

What are you waiting for? You know you want to get back in line and do this all over again, right?

By booking your stay at one of the three onsite resorts you will not only be staying a short walk or complimentary boat ride from the park -- you will also receive the Universal Express benefit to avoid long lines and get on your favorite rides like this one quickly.

Logo art and most renderings Copyright 1999-2004 Universal Orlando. This site is not an official site and any reproduction or likeness of Universal trademark properties are being used under the "Fair Use" realm due to the review and news reporting nature of our site.