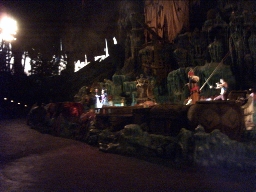 angelbree
ummm this is a funny show! when i walked in to the stage area i said wow they are giving diseny a run for there money! i thought it was gonna be boring fighting guy stuff but it turned out pretty funny! "when i find treasure it makes dance" lol i love that part. def see this show!

Laurz1985
I thought it was brilliant in fact i saw it twice, but because the swap the roles around the second one lacked something but i sat near that thing in the middleand apart from having a juggler down my row drop is macheti and call my grandad a lawyer, and also have sinbadc wink at everyone i didnt get wet at all. but probably the best bit was the Juggler's the were funny, especially the dude kerry wilson or whatver his name is.

RoxySurfer89
I thought this was a really cool show. It had a great plot, awesome effects, and it was funny. If you like to go to shows at a theme park, you should go see this one!

Punkrockergirl
This show was pretty cool. I seen something about it on tv so when I went to IOA everybody wanted to go see it... so I went too. But, it wasn't that bad.