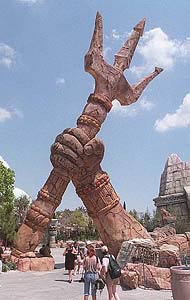 Batchelor Boy
Amzing effects, just how do you end up at the end where....no I won't spoil it...go see it and try work it out for yourself!!
Hats off to this one, it's a show but what a show!!

dtracycar
This is another reason we came to Florida. Saw a tv show on the making of this park way back in mid-1999. This ride did not disappoint me. the technology is amazing and makes for a very realistic show. loved every bit of it.

Cmainstage
What can I say about this experience but "Laaaaa-aaaaaa-aaaaaame"? After waiting over 45 minutes, a poorly written, poorly acted, and atrociously lit back story to the ride is given. If I remember my Greek mythology, and I do (thanks to Edith Hamilton), Zeus never locked Poseiden away behind a sandstone door. None-the-less, this ride claims it so.
After the initial introduction, the group passes into another room with said doorway. And wouldn't it be just our luck that after more than two millenia, it just happens to be OUR tour group that witnesses "the oracle" (though which oracle is not clear, nor why she is fuzzy projection over the door) break the seal. The door opens, and the one entertaining part of the ride is unveiled.
To get to the main theater, the crowd passes through a 48-foot tunnel of water. The effect is quite impressive. Unfortunately, our guide herded us through at a brisk jog.
In the main theater, a series of projection screens act out the battle between Zeus and Poseiden to save our band of tourists from being trapped in Atlantis forever. The battle fails to impress in a number of ways, too numerous to list. There are some very innovative techniques done with projecting images onto sheets of water, creating depth, but unless you're a rival park designer or lighting technician, they're nothing too special.
The battle seems to simply end after a few splashes and pyrotechnics, and a replica of the doorway appears, making it seem as if we'd never left the first room. And I wish I hadn't. This ride is nothing special, and I was particularly embittered after a wait bordering on an hour. If you see a tiny line, or a wait of less than 5 minutes, no harm in seeing it. The water tunnel is a sight, and the battle shows some new stuff. But, I keep saying, nothing too special.

abeger
The first half of this show is, quite frankly, boring as dirt. Listening to an actor tell us some really screwed-up version of Greek myth makes you wonder why you waited in line for this (thankfully, mine was a really short line--January is definitely the time to go). Anyway, the second half has some neat technical effects. Nothing even close to the ones you'll see on the Spider-Man ride, but pretty nifty, the more you think about it.
However, if the wait's more than 10 minutes, I'd skip this one.

camgon
First of all, I happen to know one of the actors that plays as "the old dude" as some people say, and in real life, he's pretty cool. Anyway, I do have to agree with some of the people. If it's a short wait, then go and see it. Other wise, forget it. And don't let people make you think it's a bad ride or a good ride. Simply see it for you self so you can judge how good or bad the ride is (it's really a show, by the way). I happened to think it's ok. The first time, it's great, but every time after that, it gets kind of boring, because you know what happens. All I can say is see it at least once.
P.S: Want to know a little secret? I can tell you how the tunnel of water works. Basiclly, it's a huge turning wheel like they some times have at fun houses. At the base of one side, they shoot the water out of water jets. It's so fast that, with the help of the turning wheel, it has enough momentum to make it over you, without it falling on your head. Kind of like, when you take a bucket of water and swing it over your head. If you swing the bucket fast enough, the water won't fall out. It's the same concept for the tunnel of water. Pretty cool, huh? (By the way, I happen to know the from the "old dude" I know.)