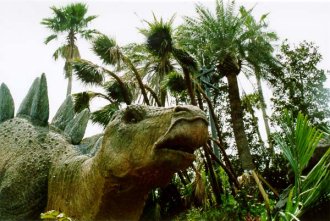 Cmainstage
The Jurassic Park River Adventure is a cleverly designed ride. It almost directly spoofs the river ride in Mexico at Disney's Epcot with its pseudo-dramatic opening recording. Once the actual ride begins, your recorded guide describes the animatronic dinosaurs around you. I was initially disappointed in the quality of the special effects, as the rest of the park is so well designed, and these creatures have some visible mechanics. I realized very quickly that the dinosaurs were not the entire ride. The ride actually begins about 1/2 way through the experience. The incline into the poorly lit control center builds a wonderful tension, and from here in the animatronics are anything but poorly done. The final drop in the ride was stunning, even for a theme-park veteran. Just when I was sure it couldn't get any steeper, it did. And continued to do so. For 85 feet.
A major plus on this ride is the duration. During busy seasons, the 45-minute wait is rewarded with a ride that's both entertaining and exciting. And during slow times, the 5 minute line is fine for a lengthy ride.

Rogue
By far my favorite. Sure the line is Atrocious, but it's well worth the wait. The dinosaurs, while not completly life-like, were just too cool for words. It was very well laid out, so that the ride climaxed at all the right points, the free-fall (while scary b/c heights are SCARY!!!) was really spectacular. I'd ride that one all day if it weren't for the line.

batchelor boy
I felt a need to add my view on this one. Of all the islands I felt that Jurassic Park was the poorest. It lacked something and I'm not sure what...a roller coaster perhaps
Seriously, this ride is ok. If you have been on the Hollywood one then this won't be anything new, in fact I would say that Hollywood Jurassic River Ride was better.
Already the dinos are worn and the mechanics were very visible, some were broken and considering the technology on display in the rest of the park, I felt this was a let down. Yes the drop is cool but that's all the ride is really.

Estefan Reporter
I was there about three weeks ago and this is a fun "end of the day" kind of water ride. You know, where your neck is whipped out of shape from the Dragons, and your stomach has been turned inside out from the Hulk. It's a good ride to sit down, cool off. Its real relaxing (the dino's are not that scary , come on.. let's be honest here) but the drop makes it worth while. Ride it at least once!

popkie
Am I the only person who doesn't want to bomb this ride and send it to h---. I like this ride a lot, it is just as good as Disney's Dinosaur ride. I actually liked most of the animatronics, though the ultrasaur wasn't working (nobody's perfect), and the T-Rex looked a bit too small. How big is that T-Rex, anyways? I liked this ride enough that I bought a sweater, and will give it a 4 out of 5, or 8 out of 10.

kxkidd
When I went on this ride we had to wait almost an hour so I thought oh man this has to be cool if there is a long line. Well when it was my turn to get on. I got on and they started talking about all these different dinosaurs and I thought this is going to be lame. Well they start yelling about a T-Rex is on the loose and so you go inside and all there raptors are running around and you see this huge t-rex and you're not paying any attention about anything but the dinosaur and you don't see the 85 ft. drop in front of you. If you go to IOA you gotta go on this ride.